It’s Your Fault When Communication Fails

One of the many great things about working with culture is that no two days are the same, and you never quite know where inspiration may come from next.

Last week I visited a bathroom at a clients office, and on the door was a big brightly coloured panel with some cryptic acronyms together with the word “shelter”.
Back outside, I asked what the sign meant – and nobody seemed to know. So I asked at the reception desk – they didn’t know either. Finally, I asked a security guard,  and with a slightly uncomfortable look he explained to me that in the event of any form of disaster – these were the locations that people were meant to run to.
The building in question has a glass atrium, open areas, and is wonderfully designed. The bathrooms were specifically architected in the strongest areas of the building to act as shelters should anything happen.
Sounds great. I’d hope that all employers put as much thought into employee safety as this particular company. Except of course that nobody knew about it. Or at least none of the group I was with – which posed several questions for me.
Firstly – how much of the communication within that building was lost? I’m pretty sure I would open an email that said “In case of disaster……” – and I’m sure that such communications were in place, or it’s part of the induction process, or maybe there are too many emails, or…..<insert your own excuse here>. Whatever the reason –  is anyone listening to the corporate voice?
Which is the core of many cultural problems in companies.
So who is to blame? Why not blame the communications group? Next to HR, I find they are typically the most maligned of internal resources. Too much comms, not enough. Too many emails. Not enough information. I’ve heard them all. Never mind that they are an advisory resource – and that everyone at the company typically wants to tell everyone else everything. 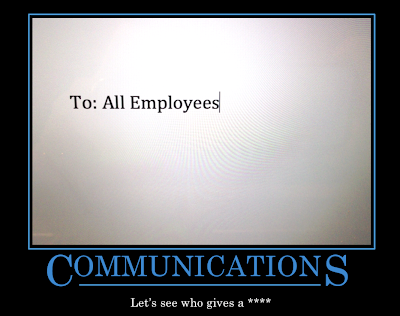 Or maybe it’s the CEO’s fault. Let’s face it, people DO tend to read emails from the top – so maybe she should have sent the email about the shelters.

But the reality is that it’s almost certainly your fault when things are not communicated. Whatever level of the company you are at – it’s you. Where’s your curiosity? Where’s the wish to learn? The drive to discover?
I wanted to know what the sign meant. Then I told everyone. It was a personal message from someone who clearly cared enough to pass it on.
Many culture issues are often connected to a lack of engagement and an individual expectation of being spoon fed information.
The solution? Very few have the commitment to try it. Stop with active communications. Active communication leads to passive recipients. Turn off the tap (or faucet if you’re American). You’ll soon see who the most engaged employees in the company are – and engagement WILL increase – I promise.
Atos are the headline act for experimenting with this – read about their zero email here in the FT.
Focus instead on making information accessible – whatever works best in your environment. It could be using Yammer or Chatter, it could be a pseudo Facebook page, posters in the halls (or in the bathrooms). But be sure to measure that engagement as you go – don’t trust to luck. Take a look here on my website for some measurement ideas…
Force feeding information reduces the expectation of people to learn. If you’re not learning, you’re not growing, and if you’re not promoting a culture of continuous learning, you’re falling behind more progressive (and frankly better) companies.