By Mark Ellis
Posted November 8, 2013
In CIPD, Culture, culture transformation, elephant in the room, Employee Engagement, Gen Y, intrapreneur, LinkedIn, Peter Cheese
0
0
I’ve spent most of this week at the 2013 CIPD annual conference – and it’s been a great experience, hearing and talking with those leading the HR field – both up on stage and in the world of Twitter and Blogs.
How would I measure the success of such an event? No surprises, of course I focus on culture and engagement…..so how did it measure up?

Well the culture was fantastic, and just what you’d expect from a group of people committed to a career of making the lives of those in companies better (don’t laugh, it’s absolutely true – bad reputations often come from misunderstanding). I found everyone was open to new ideas and seeking new ways to improve the bottom lines at their companies. There was an open collaborative culture everywhere you looked.

Engagement – well, the halls were full, the stands were packed and the speakers got feedback (mostly positive, but no one was shy about disagreement) from those in the sessions and out in the twittersphere. Note to presenters – don’t use “Gen Y” anymore – tech is changing too fast, and it’s not applicable.
Better than that though, was the overwhelming momentum that was generated AFTER the event had finished for the day – heated conversations at dinner tables (and occasionally in bars) were joined by all as the topics of the day were bounced around.

Stop asking to be at the executive table, and take the seat. Too many times (as Peter Cheese pointed out) HR talk about this and don’t take action. If you’re not already at the CEO meetings, here are some pointers:
1. Everybody listens to the head of sales, she brings a forecast of upcoming revenue, facts to back it up and everyone in the room relies on that income for their wages.
2. Everybody listens to the development head, he brings an update of how the products are performing, when the new ones are out, and how that’s going to impact sales.
3. Everybody listens to the head of communications, she brings a communication plan that supports the sales of the current products, and the new ones about to release – and how that’s going to impact sales.
4. Everybody listens to the legal head – he brings a report of the threats and opportunities to the safe running of the company, and how that’s going to impact sales.
See the pattern? How do you impact sales?
If, and I mean if, your HR head is not a direct report to the CEO – then you have a problem.
HR is not an overhead. I hear this too many times from the IT folks as well. HR is the custodian of the most valuable data about the most valuable (and typically most expensive) asset any company has.
HR owns the success and failure of all of the other departments, and should be measuring that. Companies live and die by the people who work there, not the product, or the service, or the sale.
What does HR bring to the table? The most engaged people are those who bring the greatest sales, who develop the best products, who deliver the best soundbites to the press.

They also provide the innovation and intrapreneurship for the company – every other head in the room is looking for that (they may think they know, but in my experience, the reality and the ‘managed up’ perception is rarely the same).
Sales teams with good culture fit make more money than those that don’t. HR govern the interview process, and own that data. Compare your culture profiles to that of the highest achieving sales people and demonstrate the value (in the example below ALL the quota exceeders are solid culture fits). 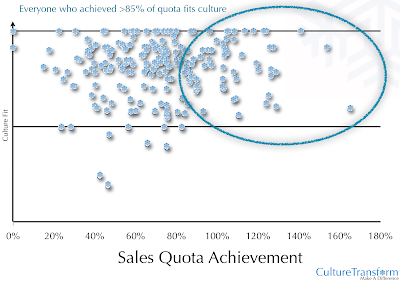 High attrition is possibly the greatest cost to any company. HR knows where that voluntary attrition is happening across the whole company – the other heads only see their own issues – mitigating that risk is something that HR are not only the best qualified to do, they are the ONLY function with the appropriate skills. 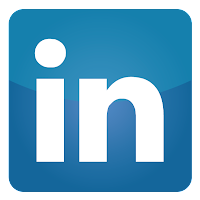 I recently had a conversation with a friend at LinkedIn. “Who do you think knows more about what’s happening in your company – HR or us?” they said.

LinkedIn know who in your company are looking for jobs, who’s engaged, who’s leaving, where they are going, what they are posting, which groups they are in, who they are connected with – HR often don’t take the time to even look at these facets. A good company with proper career management, high percentage of culture fit and great collaboration should know ALL of this.

The elephant in the room is that the HR team gets blamed for all the evils within a company, and rarely does anything to correct the perception. 200 people being laid off – instinctively the population believes that the names on the list were put there by HR. Often it’s HR managing the process, delivering the news and dealing with the fallout – sadly, they can also take the blame.

And yet it isn’t – that the decision of the CEO and his team to build a better and stronger business, HR advises and implements.

So here’s the thing.
It’s time for HR to bare it’s teeth. You are the best qualified, most connected, most influential part of any business. You have the skills, the talent and the AUTHORITY to help deliver better business results throughout all functions

PROVE that you act on behalf of the business, whilst representing the voice of the employee.

You KNOW how to strengthen and build a better culture, improve engagement, create better leaders and management, recruit and look after the wellbeing of the employee. You have the data to prove it and the motivation to do so.